The supposed conflict between science and religion that proliferates culture today possibly originated with the depiction of the 1925 Scopes “Monkey” Trial in the movie Inherit the Wind (1960).  Thinking back to you high school American history class, one event that is usually taught is the infamous Scopes Trial in which John Scopes was found guilty for teaching evolution in a Dayton, Tennessee classroom.  While this event is worthy of study for political reasons as well as educational policy, my focus in this post is the propaganda that the movie heaved upon cultural understanding of the relationship between science and religion.

A young teacher by the name of John T. Scopes was accused of teaching evolution in a state-funded school which allegedly violated the Butler Act of 1925 in Tennessee which prohibited the teaching of evolution.  Defended by the well-known trial lawyer Clarence Darrow, Scopes was prosecuted by the three-time presidential candidate William Jennings Bryan.  The atmosphere in Dayton, TN that hot summer of 1925 was electric like a sideshow carnival.  Hundreds reporters descended upon the town, including H. L. Mencken of the Baltimore Evening Sun.  Articles for newspaper and magazines produced countless articles and cartoons on the trial.  Stories were wired by telegraph as far as Europe and Australia. This was the first American trial that was broadcast by radio, while thousands of people crowded the festival like town of Dayton.  Scopes was found guilty and was fined a $100.

While the Scopes Trial in its own right was newsworthy, playwrights Jerome Lawrence and Robert Edwin Lee created it for Broadway in 1955 as Inherit the Wind.  It was later produced as a theatrical film in 1960 (directed by Stanley Kramer with Oscar winning performers Spencer Tracy and Fredric Marchand along with Gene Kelly) and subsequently in 1965, 1988, and 1999 for television.  Kevin Spacy and David Troughton starred in a 2009 revival at The Old Vic in London.

The 1960 film has by far been the most influential iteration of the Scopes Trial and unfortunately so. A much more faithful depiction of the trial is Edward J. Larson’s Pulitzer Prize winning history book Summer for the Gods. 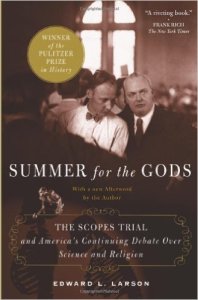 Randall Balmer of Dartmouth writing a review of Summer for the Gods states that:

Although Bryan has generally been regarded as the loser in Dayton, a hopeless throwback to the fundamentalist, antediluvian past, not all contemporaries saw it that way. “At the time,” Larson says, “in sharp contrast with later legends about the Scopes trial, no one saw the episode as a decisive triumph for the defense” (206). Only later, beginning with the 1931 publication of Frederick Lewis Allen’s Only Yesterday: An Informal History of the Nineteen-Twenties, did the Scopes trial begin to succumb to caricature, a caricature that was shamelessly perpetuated by Richard Hofstader in The American Political Tradition (1948) and Anti-Intellectualism in American Life (1963). The main culprit, however, was the play Inherit the Wind, which appeared in 1960 and which, as Larson demonstrates, was intended not so much as a representation of the trial

Balmer correctly pinpoints that Inherit the Wind was the “main culprit” for depicting the trial as an exaggeration to create a comic or grotesque effect.  Why should we be concerned with a film instead of the history.  Well, because of the influence movies have on culture.  For example, there are numerous lesson plans (here, here, here, and here) for high school students on the movie.   Just do a simple Google search to see the plethora of lesson plans available for teachers of history, English, science, and humanities that utilize Inherit the Wind.  Thousands if not tens of thousands of students are exposed to the Scopes Trial via the movie every year.

The problem is that the movie promotes the propaganda of the conflict thesis between science and religion that I have written on before (see here and here). Carol Iannone describes it aptly: “While Inherit the Wind remains faithful to the broad outlines of the historical events it portrays, it flagrantly distorts the details, and neither the fictionalized names nor the cover of artistic license can excuse what amounts to an ideologically motivated hoax.”

History of the Film:

Inherit the Wind film was a originally a theatrical play in 1955 by Jerome Lawrence and Robert Edwin Lee.  It was later produced into the well known film staring Spencer Tracy and Fredric March.  The movie was remade in 1999 starring Jack Lemmon and George C. Scott (it has several other television remakes as mentioned before).  The play, and later the movies, change the names of the actual people.  Here is a diagram to help with watching the movie.

The Movie: The teacher John Scopes was thrown in jail, burned in effigy, and was fired from being a teacher. 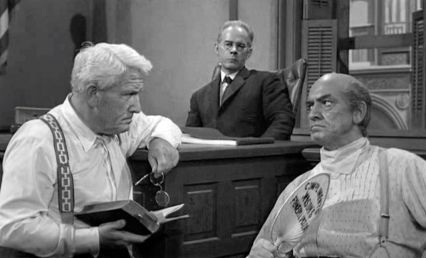 The Facts:  In reality, John Scopes spent NO time in jail, was not burned in effigy, and was offered a job the following year from the high school (which he declines)

The Movie: The refusal of the judge and William Jennings Bryan to allow expert scientific testimony to be read into the court record concerning the theory of evolution.

The Facts: The judge did allow scientific experts to read into the court record statements about evolution.

The Movie: Darrow calls Bryan to the stand to testify on Genesis, original sin and sex, and about reading Origin of Species (which he patently denied reading and refused to read).  He was depicted as citing Bishop Usher’s calculation of the age of the earth as Oct. 23, 4004 BC at 9 AM.

The Facts:  Actually, the topic of original sin and sex NEVER came up and Bryan was familiar with Origin of Species, so much so he was able to carry on a running debate with Henry Fairfield Osborn, the director of the American Museum of Natural History.  At the trial, Bryan mentioned that Usher’s calculations but that the dates were estimates and that he personally believed the earth was much older.

The Movie: The jury finds Scopes guilty and is fined $100.00.  Bryan requests a more severe punishment (which is denied by the judge).  Byran begins a dramatic concluding speech but dies in court before he could finish.

The Facts: In fact, Darrow instructs the judge to find Scopes guilty to prevent Bryan from giving a concluding speech.  Bryan did NOT ask for a harsher punishment for Scopes but offered to pay the fine himself.  He died five days after the trial in his sleep.  He is buried at Arlington National Cemetery. 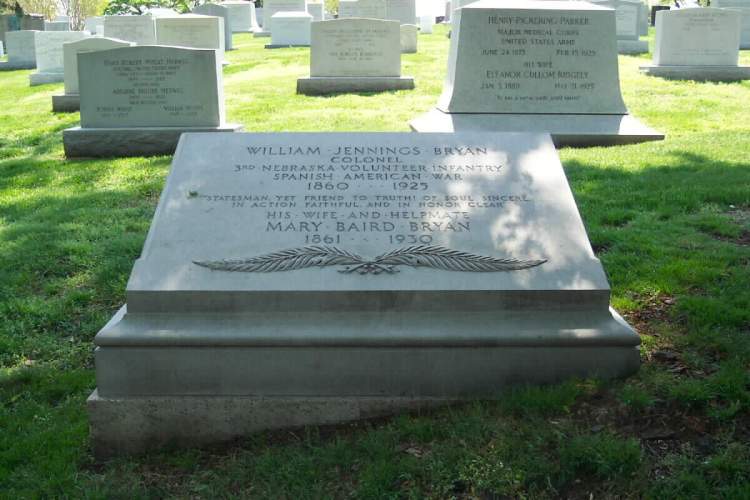 A host of other errors in the film can be shown (see resources below) but the damage, unfortunately has been done.

Inherit the Wind has influenced a generation on one of the most interesting and significant trials in American history but not for the good.  It has distorted the understanding of science and religion in a way that is nothing but a caricature of the true relationship.

Phillip E. Johnson recounts the damage the movie has accomplished at Harvard University as an undergraduate student:

Just how ugly the smear is came home to me the first time I saw the movie, in a theater to Harvard University (at a time when I would have called myself an agnostic). The demonstrative student audience freely jeered at the rubes of Hillsboro, whooped with delight at every wisecrack from [Mencken] or [Darrow], and revelled in [Bryan’s] humiliation. It occurred to me that the Harvard students were reacting much like the worst of the Hillsboro citizens in the movie. They thought they were showing how smart they were by aping the prejudices of their teachers, and by being cruel to the ghost of William Jennings Bryan -who was probably a much better man than any of them. Maybe Hillsboro isn’t just Dayton, Tennessee. Maybe sometimes it’s Harvard, or Berkeley.

Quick Quotes from the Experts:

“Also, a stereotypical image of fundamentalists was created in the minds of many secular Americans.  It was further captured in the film Inherit the Wind by the way Frederic March portrayed Bryan, which was very far from the real image.” (Edward J. Larson, “An Interview with Edward J. Larson: The Scopes Trial and America’s Continuing Debate Over Science and Religion” Theology and Science, 17.2, 2009)

“While Inherit the Wind remains faithful to the broad outlines of the historical events it portrays, it flagrantly distorts the details, and neither the fictionalized names nor the cover of artistic license can excuse what amounts to an ideologically motivated hoax. The film, for example, depicts Cates arrested in the act of teaching evolution by a grim posse of morally offended citizens, while in fact no effort was made to enforce the Butler Act. What actually brought the issue to light-never mentioned in play or film-was that the American Civil Liberties Union advertised for someone to challenge the law. Several Dayton citizens, hoping the publicity would benefit their town, approached Scopes as a possible candidate. Scopes was actually a mathematics teacher and athletic coach and had only briefly substituted as a biology teacher. He did not remember teaching evolution, but he had used the standard textbook, Hunter’s Civic Biology, which contained a short section on the subject.” (Carol Iannone, “The Truth About Inherit the Wind” First Things 70, February 1997)

“There is an overlooked source of darkness at the trial that is well worth bringing into the light, the very high-school biology textbook at issue in the trial, George William Hunter’s A Civic Biology. . . .Simply put, the textbook which John Scopes was using was offensively racist and blatantly eugenic, and the racism and eugenics were both part and parcel of Hunter’s presentation of Darwin’s theory of evolution. Hunter ranked the races according to how high each had reached on the evolutionary scale. There are ‘five races or varieties of man…the Ethiopian or Negro type…the Malay or brown race…the American Indian…the Mongolian or yellow race…and finally, the highest type of all, the Caucasians, represented by the civilized white inhabitants of Europe and America.’  By implication, we can surmise who, for Hunter, was on the bottom. Well, now. I don’t remember that in the movie.” (Benjamin Wiker, “Facts to the Wind: Reviewing Monkey Trial“, National Review Online, February 16, 2002)

Summer for the Gods: The Scopes Trial and America’s Continuing Debate Over Science and Religion by Edward J. Larson (Basic Books, 2006)

Monkey Business: The True Story of the Scopes Trial by Marvin Olasky and John Perry (B&H, 2005)

Other posts concerning science from this blog:

Science Series: The Myth that the Church Hindered the Development of Science

Science Series: The Myth that Galileo Goes to Jail

Science Series: Was Belief in God a Science-Stopper? Not for Newton

Science Series: Oxford Professor-Atheism in Decline, Will be Defeated by Faith

﻿J. Steve Lee has taught Apologetics for over a decade at Prestonwood Christian Academy. He also has taught World Religions and Philosophy at Mountain View College in Dallas. With a degree in history and education from the UNT, Steve continued his formal studies at Southwestern Baptist Theological Seminary w/ an M.A. in philosophy of religion and has pursued doctoral studies at the UT-Dallas. He is finishing his dissertation at South African Theological Seminary. He has published several articles for the Apologetics Study Bible for Students (B&H Publishing, 2010) as well as articles & reviews in various periodicals including Philosophia Christi, Hope’s Reason: A Journal of Apologetics, and the Areopagus Journal.