Anytime science and religion are brought up one can hear the proverbial announcer shout, “LETS GET READY TO RUMBLE!”

“I personally feel that the teaching of modern science is corrosive of religious belief and I’m all for that. If scientists can destroy the influence of religion on young people, then I think it may be the most important contribution that we can make.”  –Steven Weinberg, Nobel prize winning physicist of the University of Texas.

“Science flies you to the moon. Religion flies you into buildings.” –Victor Stenger, American particle physicist

These be fighting words!  Notice that Weinberg states that the most important contribution of scientists is not the mastery or understanding of nature, but the destruction of religion.

In this post in the Science Series, I want to address the myth that the Church has hindered the development of science.  In fact, the previous post on the Galileo affair and the flat earth are all part of the attempt to present the idea that science was hindered by the church.

A while back I found the following diagram (below) demonstrating that Christianity hindered the advancement of science.  That if it wasn’t for the church science would be much more developed than it is today. 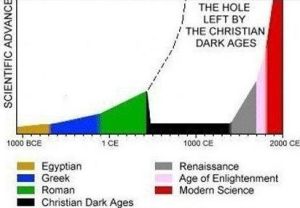 This is a commonly held notion that anyone would run across online or in our culture at large.  This is also common amongst academics as well.  Robert Wilson in his Princeton University published book Astronomy through the Ages states that the “commitment to Holy Scripture was, and still is, the fundamental basis of Christianity, but there is no doubt that it was a discouragement to scientific endeavors and these languished for a thousand years after the military fall of Rome.” (p. 45) The original Cosmos series hosted by Carl Sagan provided a timeline of the development of science in which a thousand year period was left blank during the Middle Ages with the caption “a poignant lost opportunity for mankind.”  Henry Williams book Great Astronomers dramatically illustrates this myth by having the medieval chapter consist of two biblical epigraphs followed by several blank pages.

The history is quite different from these passive aggressive attempts to slander Christianity with the idea that the church attempted to suppress science.

In the much to be read book Galileo Goes to Jail, Michael H. Shank, professor of the history of science at University of Wisconsin-Madison, states in his chapter titled “Myth 2: That the Medieval Christian Church Suppressed the Growth of Science” that “Historians of science have presented much evidence against the myth [i.e. the church hindered science].” (p.21)

In fact, the conflict thesis was invented by John Draper in his book History of the Conflict between Religion and Science (1874) and catapulted into popularity by Andrew D. White’s A History of the Warfare of Science with Theology in Christendom (1896).

In fact, the opposite of this myth is true.  Here are some of the ways the church has actually supported science:

Universities – the medieval period gave birth to the university, actively supported by the church.  A third of the curriculum at medieval universities were over the natural world.  Shank states that “hundreds of thousands of students – were exposed to science in the Greco-Arabic tradition.” He goes on to observe that “If the medieval church had intended to discourage or suppress science, it certainly made a colossal mistake in tolerating – to say nothing of supporting – the university.” (p. 21-22)

Scientific discoveries in the Middle Ages:

1. use of the camera obscura to view solar eclipses

2. resolving the problem of primary and secondary rainbows

3. application of mathematical analysis to motion

4. impetus theory to explain projectile motion and acceleration of free-fall

and of course the famed:

6. Roger Bacon (13th cent.) – an English philosopher and Franciscan friar emphasized the study of nature through empirical methods and observation.

A. N. Whitehead of Cambridge University and later Harvard University, communicated in Science and the Modern World that “faith in the possibility of science, generated antecedently to the development of modern scientific  theory, is an unconscious derivative from medieval theology.”  Genesis chapter 1 states that when God created the world he called it “good.”  If it is good then it is worthy of study.  The Christian worldview provided the philosophical underpinnings necessary for science to develop.  C. S. Lewis, in Miracles, states that “men became scientific because they expected Law in Nature, and they expected this because they believed in a Legislator [God].”  This theological foundation is one of the reasons science developed in Christian Western Europe.  Other worldviews say the physical world as an illusion, or at best a lesser reality.

Nothing speaks as loudly as money.  Science can be an expensive endeavor.  Who funded this endeavor.  If you want proof positive that the church supported the growth of science, look no further than the bank account.  “The Roman Catholic Church gave more financial and social support to the study of astronomy for over six centuries, form the recovery of ancient learning during the late Middle Ages into the Enlightenment, than any other, and probably all, other institutions.” (John Helibron The Sun in the Church, p. 3)

The church has given more money to science that any other institution.  It funded (and continues to fund) universities.  The Vatican has its own observatory.  Every time someone puts money into an offering plate at a church today, it supports science.  A portion of that money goes to the denomination of that church, they in turn give it to a university, and all the Christian universities in America have science buildings, science departments, and scientists.  Wheaton University’s Meyer Science Building cost $69 million to build and has a $11 million endowment. Baylor University’s new Science Building cost a $103 million to construct.  Who would have thought.  Every time a Christian tithes they are supporting science. Biola’s Lim Center for Science opened in 2018 costing $57 million to build and has a $8 million endowment.

In fact, the myth that the church hindered the development of science was the first myth busted in Galileo Goes to Jail and Other Myths about Science and Religion (Harvard University Press).  David Lindberg in that opening chapter reveals that just the opposite of this myth is the case: “Augustine and other like him applied Greco-Roman natural science with a vengeance to biblical interpretation.  The sciences are not be loved, but to be used.  This attitude  toward scientific knowledge was to flourish throughout the Middle Ages and well into the modern period.  Were it not for this outlook, medieval Europeans would surely have had less scientific knowledge, not more.”

The idea that the church hindered science is far from the truth:  the church has historically, philosophically, theologically, and financially supported science.  It always has and it looks like it always will.

Quick Quotes from the Experts:

“Between 1150 and 1500, more literate Europeans had had access to scientific materials than any of their predecessors in earlier cultures, thanks largely to the emergence, rapid growth, and naturalistic arts curricula of the medieval universities.  If the medieval church had intended to suppress the inquiry into nature, it must have been completely powerless, for it utterly failed to reach its goal.” (Michael H. Shank, “Myth 2: The Medieval Church’s Suppression of Science,” in Galileo Goes to Jail, p. 27)

“Theological assumptions unique to Christianity explain why science was born only in Christian Europe. Contrary to the received wisdom, religion and science not only were compatible; they were inseparable.” (Rodney Stark, For the Glory of God, p. 3)

“It must be emphatically stated that within this educational system the medieval master had a great deal of freedom. The stereotype of the Middle Ages pictures the professor as spineless and subservient, a slavish follower of Aristotle and the church fathers. . . . there was almost no doctrine, philosophical or theological, that was not submitted to minute scrutiny and criticism by scholars in the medieval university.  Certainly the master who specialized in the natural sciences would not have considered himself restricted or oppressed by either ancient or religious authority.” (David C. Lindberg, The Beginnings of Western Science p. 224, nook edition)

“The fundamental paradigm of science; its invariable stillbirths in all ancient cultures and its only viable birth in a Europe which Christian faith in the Creator had helped to form.” (Stanley L. Jaki, The Road of Science and the Ways to God, p. 243)

Galileo Goes to Jail: and Other Myths About Science and Religion, ed. Ronald L. Numbers (Harvard UP, 2009)

For the Glory of God: How Monotheism Led to Reformations, Science, Witch-Hunts, and the End of Slavery, by Rodney Stark (Princeton University Press, 2003)

The Genesis of Science: How the Christian Middle Ages Launched the Scientific Revolution, by James Hannam (Regenery, 2011)

The Beginnings of Western Science: The European Scientific Tradition in Philosophical, Religious, and Institutional Context, Prehistory to A.D. 1450, by David C. Lindberg (Univ of Chicago Press, 2008)

Theology and the Scientific Imagination from the Middle Ages to the Seventeenth Century by Amos Funkenstein (Princeton University Press, 1989)

Slaying the Dragons: Destroying the Myths in the History of Science and Faith by Allan Chapman (Lion Hudson Books, 2013)

“Science and the Church in the Middle Ages” by James Hannam, Medieval Science and Philosophy (website for the book The Genesis of Science: How the Christian Middle Ages Launched the Scientific Revolution)

“The Mythical Conflict Between Science and Religion” James Hannam, Medieval Science and Philosophy (website for the book The Genesis of Science: How the Christian Middle Ages Launched the Scientific Revolution)

Video Titled “Did the Church Suppress Science in the Middle Ages?” with Dr. Allan Chapman of Oxford University and Dr. James Hannam of British Society for the History of Science:

9 thoughts on “Science Series: The Myth that the Church Hindered the Development of Science”