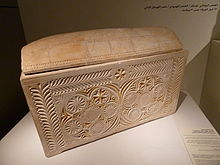 Caiaphas the high priest mentioned in Mark 14:53-65.  In verses 61-64 we read about this famous exchange between Jesus and the High Priest Caiaphas:

61 But he remained silent and made no answer. Again the high priest asked him, “Are you the Christ, the Son of the Blessed?” 62 And Jesus said, “I am, and you will see the Son of Man seated at the right hand of Power, and coming with the clouds of heaven.” 63 And the high priest tore his garments and said, “What further witnesses do we need? 64 You have heard his blasphemy. What is your decision?” And they all condemned him as deserving death.

Was Caiaphas a real person? Apparently so.  Here is a quick video from Frank Turek of Crossexamined.com about this remarkable archaeological discovery of the bone box (i.e., ossuary or coffin) of Caiaphas:

Here is another video from Drive Through History about Caiaphas and the discovery of the ossuary:

The historical Caiaphas can be crosschecked in history by the Jewish historian Jospehus, as mentioned in the video above.

Here is a bulleted point reference to the history, discovery, and significance of Caiaphas and the ossuary:

For further information on the Caiaphas ossuary see: